Cultural Collections Project 3: Neighborhood Analysis (Weebly Slide Show)
For my neighborhood study, I visited Karlín in Praha 8 [Fig 1].  Why? It was listed on several website as one of the coolest neighborhoods, not only in Prague, but in the world (#38)! Karlín abuts Praha 1 and the rest of Praha 8 extends around the bend of the Vltava river.

With Danielle and Trena as delightful company, I arrived at the Křižíkova Metro Station [Fig 2] around 2pm, which opened up to lovely tree-lined streets flanked by pastel mixed-use buildings [Fig3]. Our first turn off of ulice Křižíkova let out onto a major road that was primarily for faster car travel and housed large corporate office buildings including companies such as Philips and Lenovo as well as smaller local start-up companies [Fig 4]. Most of the residents we saw were office workers dressed in tailored business wear taking a quick smoke break.

Turning right, we headed back towards a more residential area.  All buildings were for mixed-use, typically occupied on the first floor by a variety of local businesses with apartments both owned and rented above them. The neighborhood was noticeably silent in comparison to the overcrowded tourist spots we visited earlier that day. People were rarely seen, save the occasional mom pushing a stroller or person walking their dog. The businesses were mostly open, but they were not being frequented at this time [Figs 5 & 6].

Upon going around another corner, we came upon a beautiful little square, Lyčkovo náměstí, with a garden that led up to an enormous ornate building [Fig 7]. At first, we thought it was perhaps an old castle, town hall, or post office, but on further inspection we learned that it was actually an elementary school [Fig 8]! Wandering the perimeter, we finally found the playgrounds, complete with its own garden area and Bee House [Fig 9]. There were no students there, as summer break had just begun for students in Prague and many families were on holiday.

As we completed our circuit around the back of the building, we also found a building whose sign identified it simply as "Butterfly" [Fig 10].  It had the loveliest butterfly garden in front of it, as well as a futuristic style with walls made of glass, interspersed with living greenery. After further research, I learned that it is a certified BREEAM green office building that was built in 2017. An aerial view provides further theme integration in that the building itself is shaped like a butterfly, consisting of four lobed areas of offices. Being across the street from the school that was built in 1996 in a traditional Czech style made for an interesting juxtaposition of old and new with a similar goal of improving sustainability in Prague.

To complete our neighborhood tour, we stopped at a local coffee shop [Fig 11], and chatted a bit with Jan, the owner, to learn a little more about the area. His shop is comic-book themed and he had a wonderful mango sorbet!

Would you like to know more about Karlín?
​
Cultural Collections Project 4: Museum Artifact Analysis (Voicethread)
Cultural Reflections Project 1: Czech Education System, "The Last Word" Discussion
The ministry of education has an interesting model with opportunities for vocational study and certification in a trade, as well as university study. 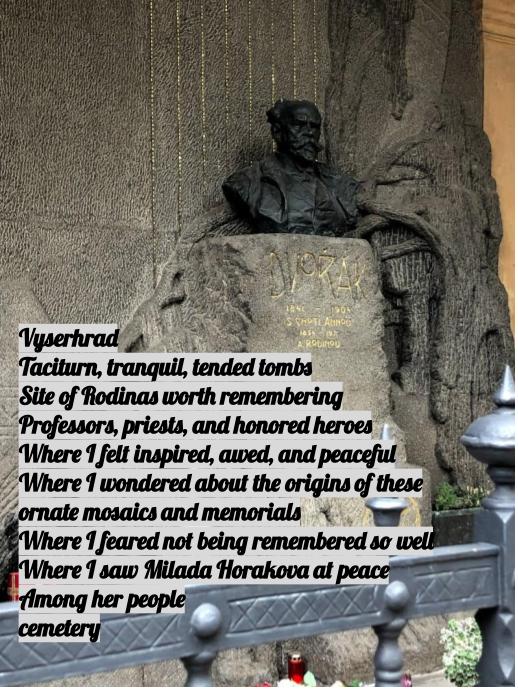 Cultural Reflections Project 3: Czech Film Review - Milada
It seems that Milada Horakova , portrayed as a role model for anyone in favor of democracy, and especially women everywhere, cannot catch a break in life.

Milada: We need to protect ourselves from an impending occupation by Germany!
Czech government: Pssh, be quiet woman, you shouldn't even be here. Buh bye.
[Hitler invades Czechoslovakia]
Gestapo: Milada Horakova, you are under arrest for being a part of the resistance movement.
Milada to Czech officials: Told you so!
Milada's husband, Bohuslav: Here's a ring I made out of super old, stale bread from my side of the concentration camp.
Milada: I will cherish this forever and it will remind me of my strength in the face of evil.
Russian soldiers: You're all free!
American soldiers: Hey, wait! We were supposed to liberate them together! *side-eyes Russia*
Milada: Home at last, but my little sister is being way too sassy to me. This Stalin seems to me like a newer version of Hitler, maybe we should learn our lesson and form our own government.
Communist Party: But... that's what we're doing... sort of. By the way, you won't get with the program so we'll just torture you into giving a false confession at a show trial so we can just get you out of our hair already.
Influential People from the West (Einstein, Eleanor Roosevelt, Churchill to name a few): FREE MILADA!
Communists: Nope.
Milada:   "I have lost this fight but I leave with honour. I love this country, I love this nation, strive for their wellbeing. I depart without rancour towards you." *drops the mic*
Cultural Reflections Project 4: Czech Book Review