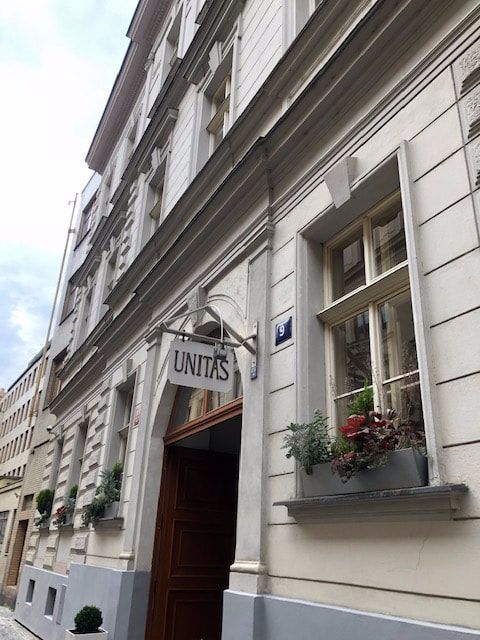 The Unitas hotel was built in the 18th century, not as a hotel, but as a monastery. This building was built by Kilian Ignaz Dientzenhofer. Maria Theresa closed this monastery in 1773 and the building was used for storage. It even became a place for concerts that Ludwig van Beethoven visited to perform in.

When the building became home to the State Secret Police, a prison was added to the building. This prison housed people who were being interrogated, including former president, Vaclav Havel, of the Czech Republic.

​For this project, I chose to visit Prague 2, a neighborhood called Vinohrady. When doing research for this project, I read that this neighborhood is close to Old Town Square and other major tourist attractions, but is a place that many local young professionals reside in. When visiting this neighborhood, I quickly realized that there was a lot of construction happening and seems to be growing. Because I visited in the middle of the day, there seemed to be a lot of people out and about. I did not notice a lot of young kids or families.

In Vinohrady, there seemed to be many businesses in the lower parts of buildings and apartments or flats in the top floors. I saw many restaurants, coffee shops and a few tourist shops, but not as many as I have seen in the neighborhoods around Old Town or the Castle District. There were many trams going by, with a lot of people coming and going. It seemed like there were more people traveling by tram or metro. As we walked away from the main road in this neighborhood, there weren’t as many people out on the sidewalks or in the roads. I also quickly noticed that there weren’t many trees or grass along the streets.

Cultural Collections Project 4: Museum Artifact Analysis (Voicethread)
To embed a copy of your Voicethread here on your portfolio page, copy the "embed code" from your Voicethread and paste below where it says "Click to set custom HTML." Finally, click "Publish" in the upper right corner to save your portfolio changes to the live site. Then you may delete this text block.
Cultural Reflections Project 1: Czech Education System, "The Last Word" Discussion
It was interesting reading about the Czech education system. The first thing that stood out to me was that 86% of children attend preschool. This includes children from ages three to six years. I found it fascinating that their pre schools go until a child is six years old, while most children in the United States start kindergarten when they are five years old. The article says that a traditional Czech preschool focuses on social and communication skills, skills that are taught through playing games. It seems that if more children in the United States had the opportunity to attend preschool, they would benefit from these early social and communication skills.

Cultural Reflections Project 2: Cultural Writing
We will be working with different cultural writing forms in Raleigh, and then you will choose one form to develop in Prague (e.g., a bio poem about a famous Czech layered over an image using Pixlr). Please include ALL of your writing here, including the test pieces from Raleigh and your original piece from Prague. Drag over relevant blocks and place below (e.g., an image block for a Pixlr image, an embed code block for a Prezi slideshow, etc.). Two image and one embed code block have already been placed below for you, but they can be deleted/changed as needed.
Cultural Reflections Project 3: Czech Film Review
Cultural Reflections Project 4: Czech Book Review
The Unbearable Lightness of Being by Milan Kundera tells the story of a woman who falls in love with a man. The man, Tomas, has a hard time committing to a relationship, but finally decides to marry Tereza, even though he is still in contact with his lover, Sabina. Sabina helps Tereza find work and is welcoming to Tereza, but Tereza has a hard time accepting this. The novel describes the feelings of each character in this complicated relationship.

I enjoyed that Kundera focuses on lightness and heaviness in this book, something that everyone can relate to in their life. I like the idea of lightness and heaviness being described in this story, but didn’t necessarily love the characters. I wanted the characters to make different choices, but I suppose that is what makes this novel so interesting.  I enjoyed reading when Tereza, Tomas and Sabina all left Prague when the Czech Communists took over the city. It was a realistic story of what was really happening at that time and how it affected the people of Prague.