CZECH CCR
Cultural Connections Project 3: Experience-Based Travel Writing Based on Meetup Group or AirBnb City Experience (Post on Travel Blog)
​by: Genevieve Stearns
Three brave souls with nerves of excitement departed from their hotel with their eyes set for a two hour adventure of paddleboarding.  After a short tram ride and a two minute walk later we arrived at the Yacht Club Cere. Now to find the guide.
With the sun peeking behind clouds, we descended a staircase the lead to the river front and our guide.
Ondra, Andrew in English, greeted us with a bright smile and a hand shake. Within minutes we were putting on our life jackets and learning paddle board basics on dry land.  He helped us adjust our paddles and corrected our technique. He even went as far as far as to explain the physics behind getting the angle of the correct stroke. Perfect for the math teacher in our group. Then one by one Ondra carried our boards to the water and helped up get out on the water. Any nerves I had were left on the dock as Ondra instructed me on how to get on the board without falling in. He was reassuring and patient. Success! I were  kneeling on board and didn't fall into the water.
Next challenge....standing on the board. Recalling our five minute lesson two of us were up and paddling. One took a tumble into the extremely cold water. Barely able to form words, she chose to use the board as a  kayak for the rest of the tour. Note to self, don't fall in.
On the open waters, Ondra pointed out important Prague buildings and answered endless questions we had about Czech culture.  The trip up river and into the wind was worth the challenge as we were rewarded with stunning views of buildings and bridges. An hour later we reached our turn around point and enjoyed a refreshing bottle of water before heading back to the marina. Our guide took several photos of us with the beautiful sights of Prague in the background.
The most valuable and enjoyable part of paddle boarding were the conversations with Ondra about Czech culture. I learned about the school system, life outside of the city, culture differences between several countries, and even had a good laugh about stereotypes.
The return trip back to the marina went quickly in spite of the change of wind. Head wind both ways didn't dampen our spirits. It was an enjoyable time both paddleboarding and being able to ask Ondra any question!  Here I thought we would just be trying to survive the cold river waves and see the sights and instead we learned so much about Czech Culture.
If you are hesitant to try paddleboarding, don't! You are missing an opportunity to try something new and learn about a new culture!
Cultural Collections Project 2: Timelining Culture (MyHistro)
Cultural Reflections Project 1: The Last Word, Czech education articles
Enter reflection here...
Cultural Reflections Project 2: Czech Book Club

The Unbearable Lightness of Being by Milan Kundera
My rating: 1 of 5 stars

To be fair I started this book with the assumption that I would gain insights about Czech Republic culture. As I progressed further into the book I realized this book wasn't going to deliver. The book at several times became unbearable for me to read simply because I had a hard time following the story. Kundera tells a story of Tomas, Teresa, Sabina, and Franz in the time when Czechoslovakia was being invaded by the Soviet Union. The reader gets different snippets of the stories of the characters in a non chronological way and the characters' stories may not fit together. Aside from the disjointed story line, Kundera uses graphic descriptions of personal relationships between the characters that was distracting from the "story line".
After reading other reviews, and now discussing the book with my book circle, I feel that I could possibly give the book another read at a much MUCH later time. 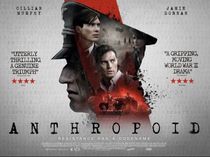 4/5 stars
Excellent choice to learn how the "Butcher of Prague" met his demise. I chose to watch this movie for a number of reasons. First the plot line. There was enough information given in the description that peaked my interest about this historical event that I knew nothing about. Second reason being the cast. I enjoyed Cillian Murphy in Peaky Blinders so I thought it would be good to see him in a different role.
The movie is set in Prague in 1942. The two main characters, Jozef and Jan, are airdropped in the wrong area and have to make their way to Prague to meet their contacts so that they can carry out their orders of Operation Anthropoid. The movie gives the viewer a real sense of how scary the times were. No one can trust anyone. Any action against the Nazis will result in death. Despite what they were up against Operation Anthropoid was a success. It is a story based on true events. A story that Czech Republic citizens are proud of today.
Cultural Reflections Project 4: Famous Czechs, Bio Poem (Pixlr)​
Cultural Reflections Project 5: Urban Neighborhood Analysis (from Field Research)
Praha 7 - Letna
This neighborhood had easy access to several tram stations. The roads were cobblestone and the buildings were in good condition.  Several businesses lined the areas of the tram stops while apartment housing as well as single family homes were adjacent to the park. The park really was the crowning jewel of Praha 7. This park spanned several city blockas and boasts the most beautiful views of Prague city, once you make it up a very steep incline. The neighboorhood felt peaceful and many people were out enjoying it. The weather was great for meeting at the park to enjoy lunch, there were a few restuarants, play with their dogs and children, or to play games. The neighborhood was clean and bright with colorful buildings and flowers. ​
Cultural Reflections Project 6: Czech Education Analysis (from Field Research)
July 11 we toured the National Pedagogical Museum and John Amos Library.
Cultural Reflections Project 7: Czech Literature Analysis (from Field Research)
Post your analysis here...

Cultural Reflections Project 8: Czech Art/Visual Analysis (from Field Research)
Wednesday July 18th we visited the Kampa Museum of Modern Art. Located along the Vltava River the building is a blend of old and new.  The building is old but is made modern with the addition of a glass handing tower outside and many sculptures to enjoy outside on the grounds. The museum can be enjoyed even if you don't buy a ticket which is exactly that the founder Meda Mladek wanted.
The first piece of art that I chose to analyze was a sculpture by Otto Gutfreund. The man's face formed from bronze appeared to be weathered, old, and practically melting. It was the face of a man who has seen a lot. The lines were deep giving the face a almost contorted appearance. My classmate agreed that the expression could be from one from Czechia who has seen his country torn apart by war. The sculpture appears to be tormented, changing, looking for an identity.  This is how several Czechia people feel about themselves today. They are trying to keep their traditions without having someone telling them what they should be.
The second piece of art that I chose to analyze was a collage by Jiri Kolar entitled "Garden Party". I was drawn to it because of the interesting way Kolar layered the black and white images to create new ones.  Some faces were created with two halves of different photos. In another layer you see a lamp for a head, a woman's torso, and a man's legs. All so interesting and drawing your eye all over the pictures with always see something new or in a new way. My classmates and I enjoyed pointing out the curious images on the collage. Some of the feelings from the images were conflict, love, and innocence. One image pointed out by a classmate was a soldier with a gun standing in front of a girl holding up a flower; war and peace. Several images like this one were apparent in the piece. We felt that this could be related back to the Velvet Revolution times and the peaceful way Czechia people wanted their country back. Czechia has a history the is complicated and has many layers, just like this collage. It is also black and white and adds to the feeling of it being something in the past.
Cultural Reflections Project 9: Czech Site Analysis, Site-Based Travel Writing (Post on Travel Blog)
​by: Genevieve Stearns
A Museum to Quench the Thirst of your Mind and Body
When your friend is studying the history of beer and asks if you want to tag along to the Czech Beer Museum in Prague of course you say, "YES!"  The address was plugged into Google and we were off. Through the twisty turns of Prague 1, Jasmine and I arrived at the Beer Museum in about 20 minutes. It could be easy to miss as the sign for the museum from the street was small and unassuming.
Excited that we found our destination we walked through a courtyard speckled with huge barrel tables and beer crate stools. There were a few people enjoying their beer in the sunshine. Through the doorway in the back of the courtyard we bought our tickets that included a "tasting" at the end. It was tempting to add the "bottle your own bottle" souvenir but decided to hold off and see if the beer was going to be good and worth bottling.  Tickets in hand we headed back into the courtyard from which we entered and into doorway on the left to start our self guided tour.
The four rooms were filled with everything you could want to know about the history of beer. A mix of panels to read and actual working machinery of the brewery process intermingled as we learned how beer got started. We learned the progression of beer through the ages in the Czech Republic. The back room to the right gave current facts on the consumption of beer by Czech people. Shocker they consume the most per capita in the world! The four rooms also contained various steins, bottles, caps, and beer warmers used throughout the centuries. The final two rooms gave more detail about the actual brewing process. There was even a station to smell hops and touch malts!
About an 80 minutes later we headed out for the second section of the museum. A narrow spiral staircase took us below ground. The cool air was a welcomed relief from the heat of the day. Not much to see downstairs. We learned how they were able to keep beer chilled during the brewing process and learned how pubs had to be hidden during the Communist Era. Drinking was common during the work day.  What the underground level lacked in information it made up for in experience of what it was like to drink in secret.
In the Communist Era pub was the beer maid. We proudly handed over our tickets in exchange for the largest tasting I have ever laid eyes on. She explained the different types of beer we were served and the order we should drink them in. With our beer loaded into a wrought iron caddy we carefully navigated back up the spiral stairs to the courtyard. The wind and picked up and the rain was coming. Back down we went not spilling a drop.
Enjoying our beers in a Communist Era styled pub added to the experience of our day at the Czech Beer Museum in Prague. 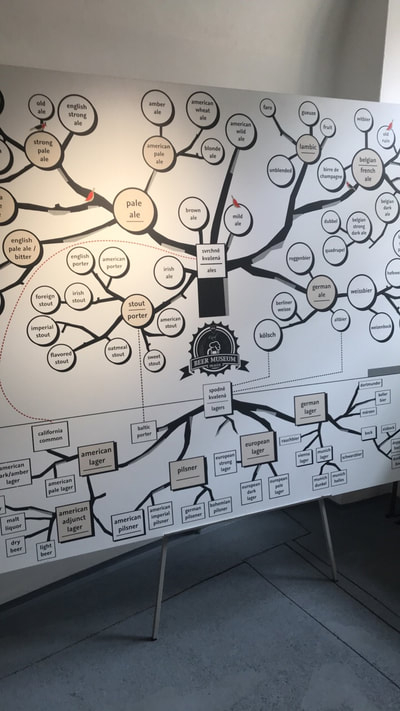 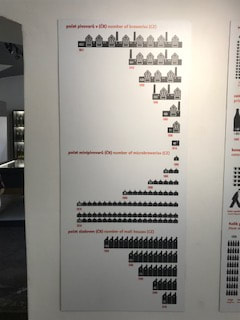 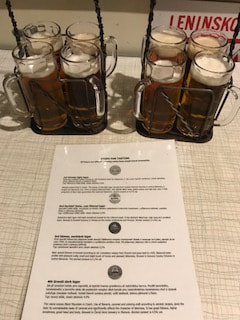