Cultural Collections Project 3: Neighborhood Analysis (Weebly Slide Show)
I was first made aware of the Vršovice neighborhood while interviewing a man named Peter, who was the proprietor of a Czech laundromat. When I asked him about places to explore in Prague that aren’t infested with tour groups, Peter excitedly opened a foldable city map and circled the residential neighborhood of Vršovice.
“It’s a very Czech neighborhood. No tourists,” he explained. “It is like Czech version of Montmartre - you know, the neighborhood in Paris? Lots of cafes, cool things to see.” He circled one street in particular and tapped his pen. “You see this street? This is Krymska. This is the heart of the neighborhood.” I was intrigued, and I had to see it for myself.
Located southeast of the Old Town, the majority of Vršovice falls within the Prague X district. Vršovice is easily accessed through the Prague metro’s “A Line”, which spits you out into the Jiriho z Podebrad park. To the north lies the neighborhood of Zizkov, anchored by the eponymous television tower - the tallest building in Prague. Turning to the south takes you across the bustling avenue of Vinohradska, whose tram tracks mark the northern boundary of Vršovice.
I entered the neighborhood on foot at 1 PM, on a blazing hot day. The much-publicized European heat wave was on full display. After a morning walking tour through the Old Town, I was already thirsty and dripping with sweat. The sky was a clear, piercing blue, with few passing clouds to offer a reprieve from the scorching sun. Nevertheless, I had a mission in front of me.
I began my journey by working my way through the eastern half of the neighborhood. The hilly streets were laid out in a typical grid pattern, dotted with regularly-spaced houses like kernels of corn on a cob. Most of the houses had two stories, neatly-trimmed small lawns, and were architecturally similar. Modest waist-high stone walls lined the sidewalks. I noticed almost no pedestrians, which was probably a side-effect of the heat wave. There were a few couples walking with baby carriages. With few exceptions, the parents appeared to be in their mid-30s. I inferred that the fact that these couples were having babies at this stage in their lives could indicate that many of the residents of Vršovice wait until they are well-established financially before having children.
As I continued to probe the neighborhood’s side streets, storm clouds began to roll in. Winds pushed through the trees, scattering thousands of pollen pods. I worked my way further south, where the houses gave way to proud rows of modern apartment buildings. I began to notice the constant presence of low-effort graffiti on almost any available surface; trash bins, walls, doors, fences, even utility boxes. Most of the graffiti seemed to be simple, one-off tags - nothing more than “I was here, once.” A few of the examples of graffiti were in English, which featured colorful anti-police language slogans. Disinterested dogwalkers avoided eye contact with me as I continued my observational journey through Vršovice, the occasional raindrop staining my sweat-soaked shirt. Farther into the neighborhood, several families with children began to appear. Some held soccer balls, while others walked dogs who panted heavily in the heat.
Most of the streets funneled into Moskevska Avenue, whose gentle S-shaped tram line bisects Vršovice neatly in two. Turning west, the streets began to narrow to only the width of a single car, and run into each other at odd angles. Smooth asphalt gave way to irregular cobblestone. I began to get the distinct impression that the western half of the neighborhood was significantly older than the eastern half.
The western half of Vršovice was full of vacant storefronts, overgrown dying grass, and the occasional ethnic restaurant - including Greek, Mexican, Thai, and Turkish food. The most common type of restaurant I saw was Vietnamese restaurants. This seemed to indicate that Vršovice had a significant population of Vietnamese and other East Asian immigrants. The internationality of the neighborhood was mirrored by the street names - I saw streets named after Madrid, Mexico, Estonia, Norway, and other geographical locations in the southern half of the neighborhood. To me, this would indicate that those areas were all constructed contemporaneously and that the streets were named after an international theme.
Disappointingly, the much-anticipated Krymska Street was largely under construction. Laborers sweated under the hot Czech sun as they unloaded dusty cobblestones from a dump truck. Most shops, cafes, and stores were closed - many permanently. The only business I saw open on Krymska was a chain sports store, which contained nothing original or distinctive. I began to get the impression that I arrived at the wrong time of day to see the neighborhood at its fullest.
Economically, Vršovice appeared to be a mixed-income neighborhood. Interestingly, the district contained several indicators of both high and low incomes. Parts of the neighborhood were dominated by scrawled graffiti, broken sidewalks, overgrown grass, and shuttered businesses, while other buildings contained legal & real estate offices, yoga studios, and even a beauty salon for pets. To me, this indicated that there was a high degree of disposable income among many of the neighborhood’s residents. Shiny new BMWs were parked alongside beat-up Škodas. Overall, Vršovice struck me as a diverse neighborhood in transition; not fully modernized, and not quite fully Czech.
Cultural Collections Project 4: Museum Artifact Analysis (Voicethread)
Cultural Reflections Project 1: Czech Education System, "The Last Word" Discussion
One aspect that I found was interesting is the parallels between the American and Czech education systems.
Cultural Reflections Project 2: Cultural Writing 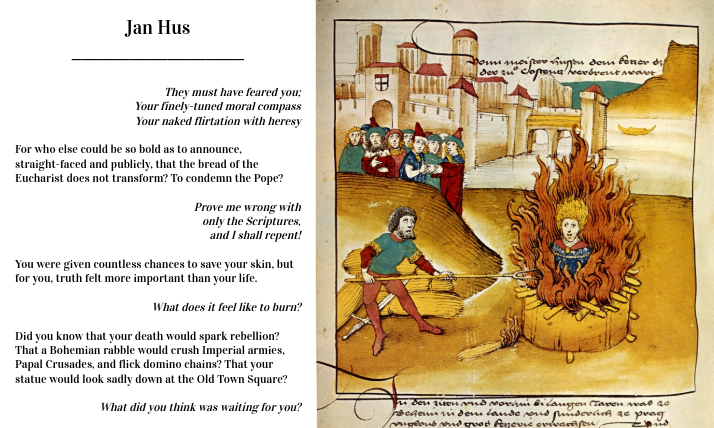