I am an Instructional Technology Facilitator at Ephesus Elementary School currently living in Durham, North Carolina.   Originally from Long Island, New York I found my way to the teaching profession after a career in radio broadcasting and podcasting (before the term, we used "on demand streaming").
I earned my Master's degree in Learning Design and Technology from North Carolina State University in 2017.  My Master's in Literacy Education was earned in 2013 at University of North Carolina at Greensboro.  My pedagogical passions are curriculum and instruction focused on language and new literacies.

I am also interested in kayaking, photography, and my feline clan which includes several calico cats and tabbies. All were taken in off the street or adopted from rescue organizations. 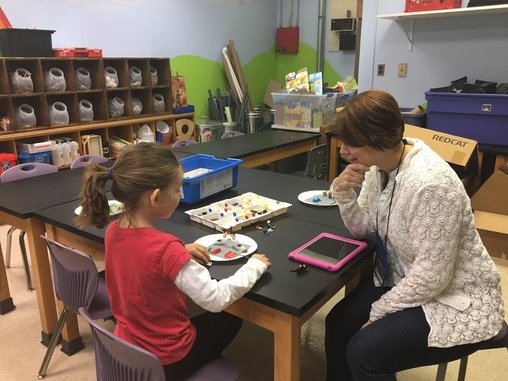 As a teacher in an instructional coaching role with technology, this section of reform efforts was interesting.   The discussion raised more questions.  Questions about what technology is available and how teachers are supported.  Then our questions turned to compensation and the general sense of doing more with less in the United States.  We wondered if it were a similar situation.  We compared the centralization efforts to Common Core reform efforts.

Another potential similarity was found with Career and Technical Education (CTE) in North Carolina and technical and vocational education in Czechia.  "In order to further promote technical and vocational programs, the Ministry of Education, Youth and Sport is working on changing the funding system for regional education, so as to better reflect the long-term employability of graduates in the labour market." (2016, p. 10).   Again, we raised more questions than answers.  We tried to make sense of the funding structure and draw parallels to what we know as Local Education Agencies (LEAs), or local school districts.  The organization of funding seemed very different, although we just may have been confused because of unfamiliar vocabulary  used to describe potentially analogous terms.

The Last Word protocol allowed us to not only share our takeaways from the text, but also get to know one another early on in our cohort cohesion, as we learned what resonated with one another and our perspectives from a variety of educational experiences.

The Golem by Gustav Meyrink
My rating: 2 of 5 stars

I was hoping to understand something of the culture of the time by reading this book. The style of this book with its lengthy one-sentence, descriptive paragraphs takes the reader on a curly-cue ride to an indeterminate place. One thing is certain, you would not want to visit The Ghetto that Meyrink introduces us to as it seems dangerous, dirty and possibly of ill-repute evidenced when he says "Only a man whose roots were in the Ghetto and whose every fibre was soaked in Ghetto lore...could have gone on perpetrating such atrocities for years without being caught" (kindle version location 445), remarking about the doctor's immoral behavior in scamming patients. Does this tell me about the culture of the time? Probably not any more than it is telling of the narrator's view of people in The Ghetto. Gustav Meyrink alluded to his perspectives on its inhabitants earlier in a more direct way: "There is no one living anywhere in the Ghetto capable of laughing cheerfully." (kindle version location 204). Can we surmise he was not Jewish?

The reader must give full attention to the chapters in order to follow the narrator in and out of surreal territory. Multi-tasking will not be possible.

Herr Pernath confuses me. Is he real? Is he The Golem? Is he still there if he takes off the hat? It's almost as if Meyrink leaves it up to you.

As a companion piece, David Wisniewski's picture story with photographs of cut-paper illustrations delves into the actual Golem story. Further insight about Meyrink is helpful at http://www.ritmanlibrary.com/2012/12/... and offers more clues about his perspective that undoubtedly infiltrated his cylindrical prose.

View all my reviews
Cultural Reflections Project 3: Czech Film Club
​Marketa Lazarova
I watched this film in two shifts, taking notes along the way in order to make sense of the characters among several clans during the Middle Ages.  This essay by Tom Gunning sheds light on an otherwise murky plot line.   While the subject matter of clans warring over resources, females and religion revealed itself about midway through the three-hour epic, this film needs to be considered in context of the times in which it was created.
I appreciated the artistic cinematography and on-location film making that was likely remarkable for its time in the 1960s.

Marketa Lazarova explores the Middle Ages, and while wondering how this could shed light on Czech culture, I realized that it offered insight into an almost pre-civilization as we 21st Century citizens know it.  I did not expect vast plains and stark winter landscapes, but why would I, as a city-dweller?  Of course there are no baroque or gothic buildings.  The setting was pre-economic development that would follow in the next few centuries.  Re-reading the Development of the Czech Education article (Vlčková), I was able to put Marketa and her family's rival clan in their proper place.  At the front lines of the Christian evolution that would overtake the Paganism of the time.   Marketa, void of a full dowry, was turned away from the nunnery, which was likely the only place she would have received any education.  As  Vlčková describes, monks and priests were the early teachers as villages became town after the Crusades.

I compare this film to Quest for Fire, another film that explores early man and feels so remote to the modern-day viewer.  Both are adapted from novels and both rely on visual storytelling more than verbal, although Marketa Lazarova did have subtitles.   It would be interesting to watch one followed by the other.  Perhaps Marketa Lazarova tells us less about Czech culture, and more about humanity in general.
​
Cultural Reflections Project 4: Famous Czechs, Bio Poem (Pixlr) 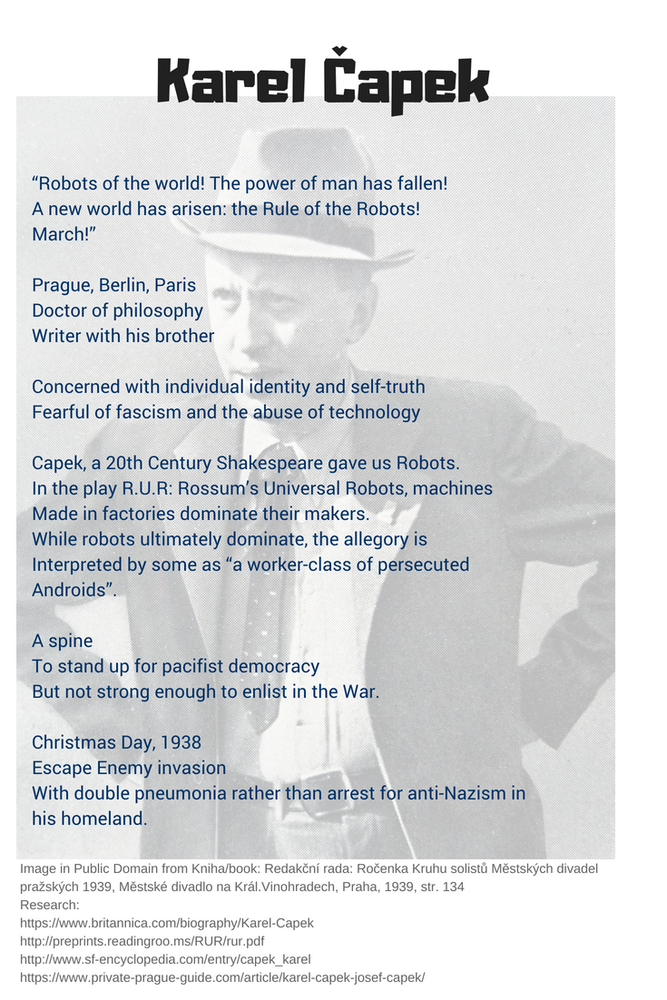 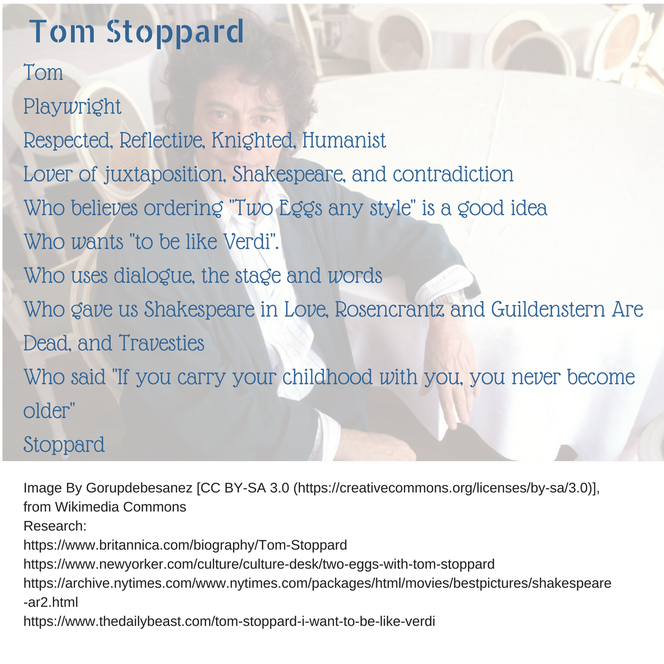 Janet and I took our tram 22 in the wrong direction but realized a park was ahead so we decided to venture up the path. We had no idea we had stumbled upon a memorial and gardens. We were at the foot of Petrin Hill.

​We chose not to climb too far since we had just finished a 2 hour tour. But we were intrigued enough to meander past the Monument for Victims of Communism after examining the sculptures.

The mixture of flower garden, fruit trees, and playground areas combine in a way that appears to mix the importance of nature with remembrance.  The youthful fountain across from a statue of Jan Neruda (not pictured) overlooks the neighborhood which includes a kindergarten serving children ages 3 through 7.

While there were tourists in line to take a tram up the side of the hill, we found the park to be very peaceful while children played on the playgrounds. We suspected some sort of nursery based on the size if the playthings and an empty wading pool. It wasn't until we peeked into a garden area sprinkled with gnomes that we spotted the sign for Materska Skola. I loved the stones painted with names of children in piles or clumped together. What a great idea for symbolozing that children are a part of the garden in kindergarten.

The trees here differ from those in my Durham yard and the contrast with the tram tracks further juxtapose modern life paying tribute to the past among nature.  Although we were among orchards, we were just one block away from local commerce. One of the thai restaurants  had signs outside that evoked positivity and oneness with nature. Green spaces are evidently important here. Both for recreation and homage.  I focused on the park as it serves as a model for preserving the past while providing open spaces for the future.

Our short jouney to the bottom of Petrin Hill was a brief escape from throngs of tourists. We further enjoyed an impromptu stop for gelato before taking a gamble on finding our way back via both the tram and subway.  I believe we learned to let the journey itself be our guide. There will always be something interesting up ahead, even if it wasn't what you had planned.
​
links: http://www.praha.eu/jnp/cz/co_delat_v_praze/parky/petrin/petrin.html​

While life is not easy under communist rule, our schooling is well-funded by the state. I breathe better in my class than my parents did when they were in school. Central heating warms us rather than the stoves that used to keep us warm.
Our hygiene is important and we take measures to change our clothes when we get to school. Our shoes dangle in a bag under the desk. From my seat I can smell the sweat in the soles.
My teacher sits ahead of us at her large desk. I hear the scratching of her pen on the book that keeps our marks. She scribbles notes in a fluid motion. I have not yet learned to write script, but I hope to soon.
Cultural Reflections Project 7: Czech Literature Analysis (from Field Research) in video form
Cultural Reflections Project 8: Czech Art/Visual Analysis (from Field Research) 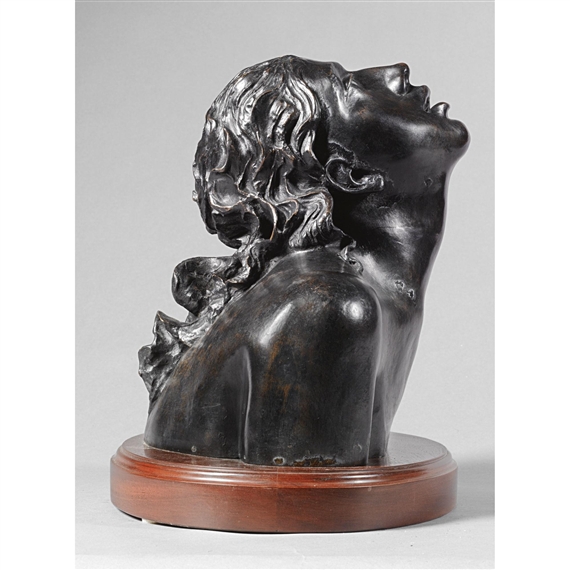 Gutfreund, Otto. (1924). Woman Looking Up. https://www.mutualart.com/Artwork/Woman-Looking-Up--VZHLIZEJICI-/FC32056A642CEA8C
What is going on?
I think this girl is open to possibilities.  Her loose hair falls carelessly around her.  She could be in a shower letting the water run down her back.  Her shoulders are perched forward as if she is leaning in to someone or something.

What do I see that makes me say that?
Her mouth is open and her posture is suggestive.  The smooth bronze shoulders evoke more sensuality than the sharp cubist sculpture adjacent to this piece.

What more can we find?
Gutfreund's attention to the movement in her hair lead me to think he knows his subject intimately, either personally or just by her posing for this sculpture.  Perhaps they are lovers.  Further exploration into this artist reveals a series of sculptures with the lovers theme.

What does this reveal about Czech culture?
I hesitate to make sweeping generalizations based on one piece, but given the other works in the Kampa Museum it is evident that several artists in this culture are or were interested in the female form.  From Kupka's nude painting of his step-daughter to the remixed collages of women in 1960s magazines by Jiří Kolář and the printed human forms by Rudolf Němec, bodies are of interest here. 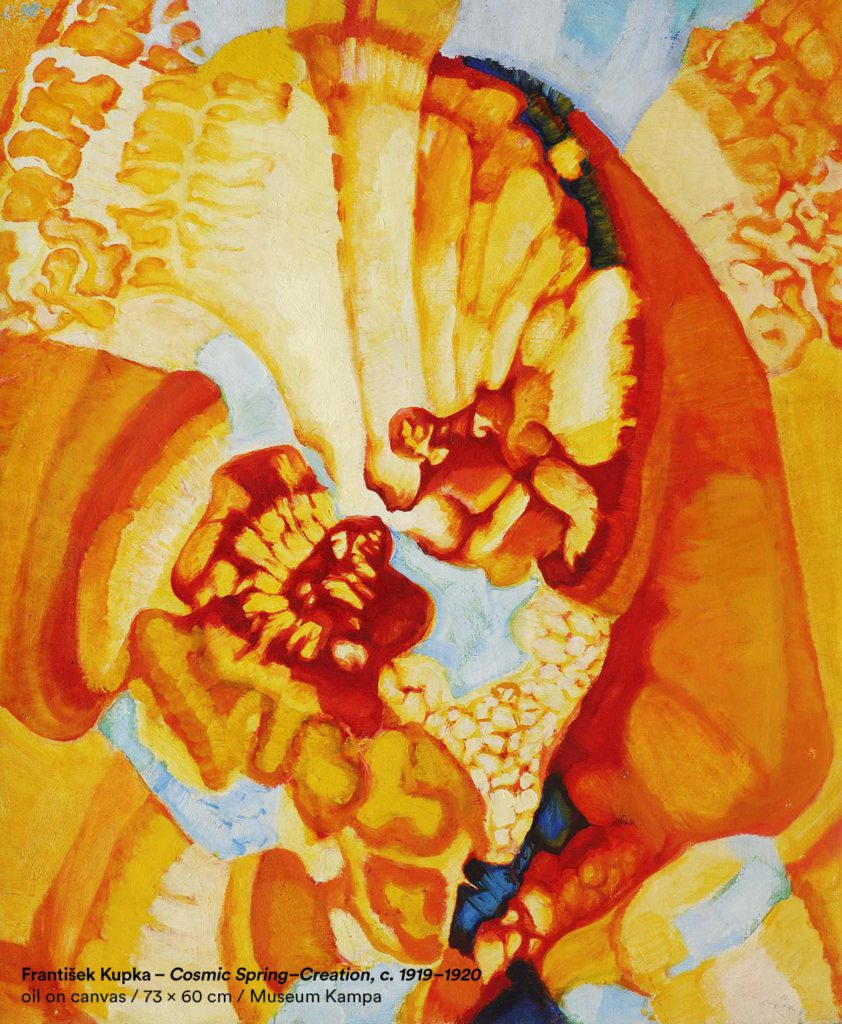 Kupka, František. (1919-1920). Cosmic Spring - Creation. http://www.museumkampa.cz/vystava/the-jan-and-meda-mladek-collection/
What's going on here?
Movement.  Movement. and more Movement.   This is a journey towards the center, to the heat.

What do I see that makes me say that?
The deep red, like a beating heart, pulses in contrast to the pale yellows and blues nearby.  The eye wanders in a circular patterns, until it cannot help but fall in.  The light blue adds a cooling element to the fire.

What more can we find?
The thinner orange lines resemble cell membranes and are reminiscent of cell reproduction.  The thicker orange and darker yellow separate sections of the thing that is moving.  This piece is called Cosmic Spring - Creation.  Maybe this is a symbol of growth.

What does this reveal about Czech culture?
This country has had so many changes in government in its history.  Maybe the people are part of cyclical rebirth.
​
Cultural Reflections Project 9: Czech Site Analysis, Site-Based Travel Writing